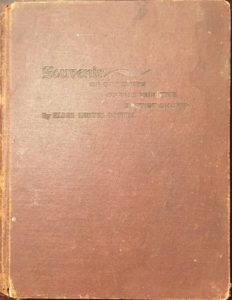 Souvenir of Ministers of the Primitive Baptist Church by Elder Lemuel Potter, 1895

Elder Lemuel Potter (1841-1897) of Indiana was a well known and universally well
regarded minister of the Primitive Baptist Churches who died at the early age of 56.  In only 30 years of active ministry, he became a household name among the Primitive Baptists through his preaching, writing, publishing, and a number of debates with champions of the Churches of Christ, Missionary Baptist and other orders.

Elder Potter is perhaps most well known for his debate with Dr. W. P. Throgmorton in July, 1887 on the question, “Who are the Primitive Baptists?”  Additionally, Elder Potter wrote a number of articles for the various periodicals in popular circulation, and was a frequent correspondent of Elder S. F. Cayce, Elder J. H. Oliphant and others of mid-Western connection.  As a publisher, Elder Potter produced 25 volumes (years) of a semi-monthly periodical entitled The Church Advocate (if any readers may have access to any copies of this paper, we would value the contribution to our holdings).  Regular contributors of the periodical included Elder I. N. Vanmeter, J. H. Oliphant, G. M. Thompson, etc.

Without the benefit of social media, digital communications, and the other technology with which we are accustomed, Primitive Baptists of the 19th century often read articles and materials by men whose faces they never say and whom they were able to learn little about.  By the last decade of the 1800’s, there were a number of attempts to provide a personal and photographic introduction of some of the more prominent ministers of our order.  Among the most widely circulated of these were: Portraits of Primitive Baptist Ministers edited and compiled by Elder Walter Cash, 1896; and the subject of this post, Souvenirs of Ministers of the Primitive Baptist Church edited by Elder Lemuel Potter, 1895.